Tiana Woodard reports from the University of Texas at Austin. Hana Kawashima Ransom is an immigrant translator who traded a gift of a kimono for a gift visit to the United States.

A SINGLE DROP OF HONEY:  WINNIE THE POOH AND AN ADVENTURE TO TEXAS

Growing up in rural Japan, Hana Kawashima Ransom struggled to meet her country’s expectations of women. By learning English, she found a new place for herself in the United States. 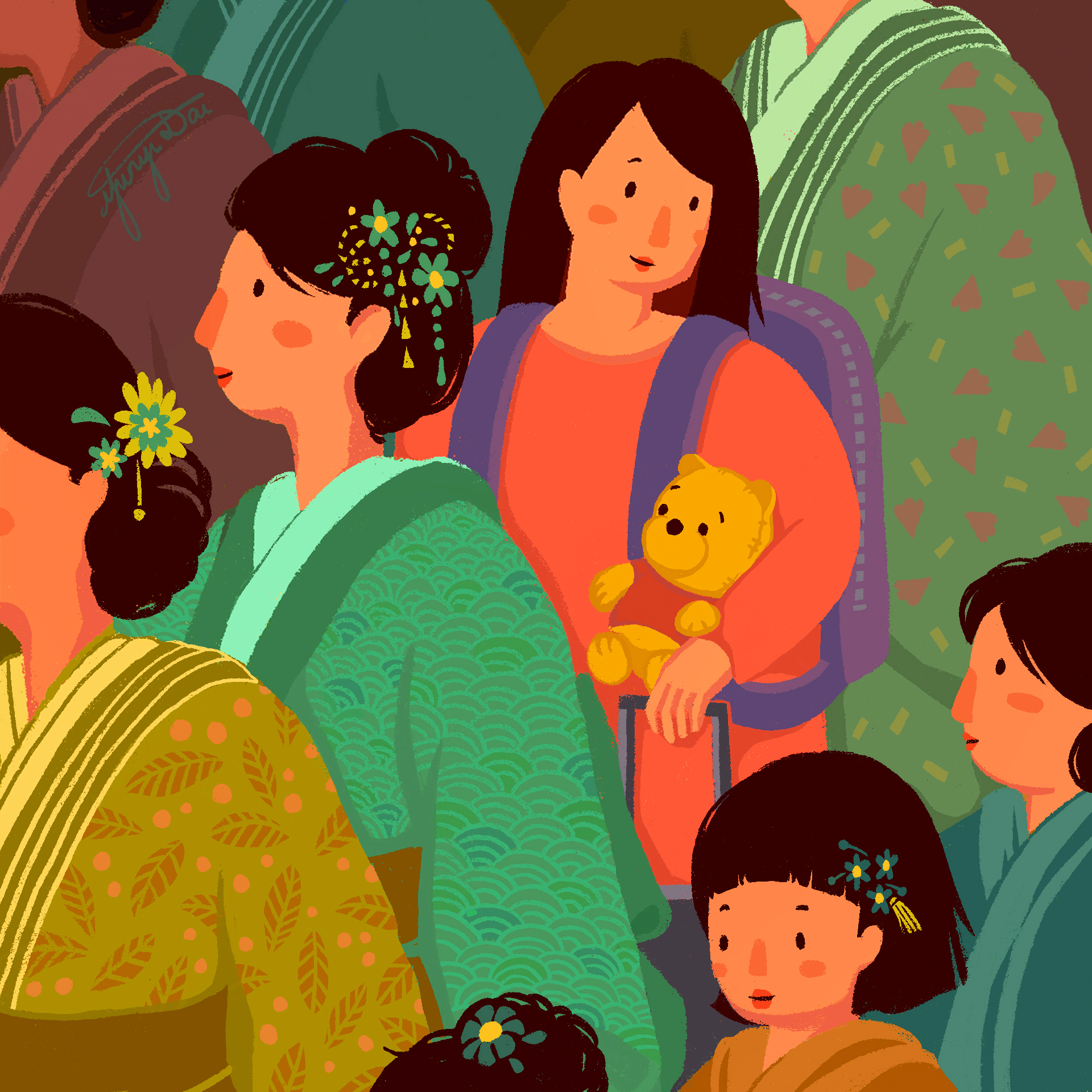 A Single Drop of Honey: Winnie The Pooh And An Adventure To Texas

In Sapporo, Japan, many women look forward to receiving a kimono for their coming-of-age ceremony. But at age 20, Hana Kawashima Ransom only wanted one thing: to visit the United States.

Japanese parents pay hundreds to thousands of dollars to give their daughters these colorful, patterned garments for their 20th birthday.

“[My parents] were preparing to spend several thousand dollars just to buy the kimono for me,” Kawashima Ransom says. “I said, ‘Well, look, if you have that much money to spend on kimono, do you mind paying for my trip to the United States?’ ”

Kawashima Ransom eventually moved to the U.S. after her first visit in 1989. She now works as a freelance English-to-Japanese translator from Austin. In moving abroad, Kawashima Ransom upended cultural expectations, forming her own values, which include lifelong friendship.

She says she struggled to meet Japan’s expectations for women from an early age. Women were expected to become housewives, she says, but she couldn’t cook, sew or pour saké for men.

“I thought, ‘There’s got to be somewhere in the world where I feel comfortable,’ ” Kawashima Ransom says. “ ‘I may not speak [English] now, but one day I will.’ ”

Her father, a doctor, began English lessons with an American tutor when she was 5 years old. Kawashima Ransom says these visits sparked her interest in learning the language. She thought it would give her the opportunity to make friends with people from all over the world, she says.

But she didn’t get into her choice of high school. Feeling “isolated,” the rejection pushed her to pick up A. A. Milne’s “Winnie the Pooh,” a story she says “saved [my] life.”

Kawashima Ransom says the stories were the final push she needed to master the English language at age 15.

“I made a pilgrimage two times to the Poohsticks Bridge and had a cup of tea there and took pictures at the Winnie the Pooh Poohsticks Bridge,” she says. “I didn’t understand why so many people took it like [a children’s book] because that was my dream.”

Despite studying English language and literature at Tsuda University in Tokyo, Kawashima Ransom still found it challenging to speak. Then she got an opportunity to improve her fluency by staying with a host family in Houston.

Kawashima Ransom arrived at the airport for her monthlong visit, but her host family wasn’t there.

She had written to her hosts that she would touch down in Houston at “13 o’clock,” but they misunderstood the time as 3 p.m.

There was a language barrier.

“I could ask [for help], but I couldn’t understand the answer,” Kawashima Ransom says. “So I was just standing at the arrival gate for hours, not knowing what to do.”

After her return to Japan, she applied to Texas universities and then attended the University of St. Thomas for a year. Kawashima Ransom says she decided not to speak Japanese for a year to become more fluent in English. To stay on track, she shoved chips in her mouth.

“Whenever I wanted to say something but couldn’t, and my mouth wanted some kind of attention,” Kawashima Ransom says. “I gained like 20 pounds.”

Her introduction to bottomless chips at a Tex-Mex restaurant exposed her to American generosity, she says.

In addition to hefty portions, drink requests from servers shocked her the most, Kawashima Ransom says. Because she was raised to favor harmony over individual wants, she had never thought of what she wanted.

“That really helped me think of … who I really am,” she says.

The experience solidified her desire to live in the U.S. Kawashima Ransom began teaching English conversation classes and later was accepted into the University of Texas at Austin’s graduate program.

“I really got a lot of help from American people,” she says. “It’s my turn to help people here who want to go to Japan.”

She also hopes her books and teachings can help Japanese people experience the same “freedom and liberation” she did. Her first book, “English Expressions in Signs, Labels and Packaging,” helps Japanese visitors decode American signage.

“If you learn English, you can make tons of friends, and your world will be totally different,” Kawashima Ransom says. 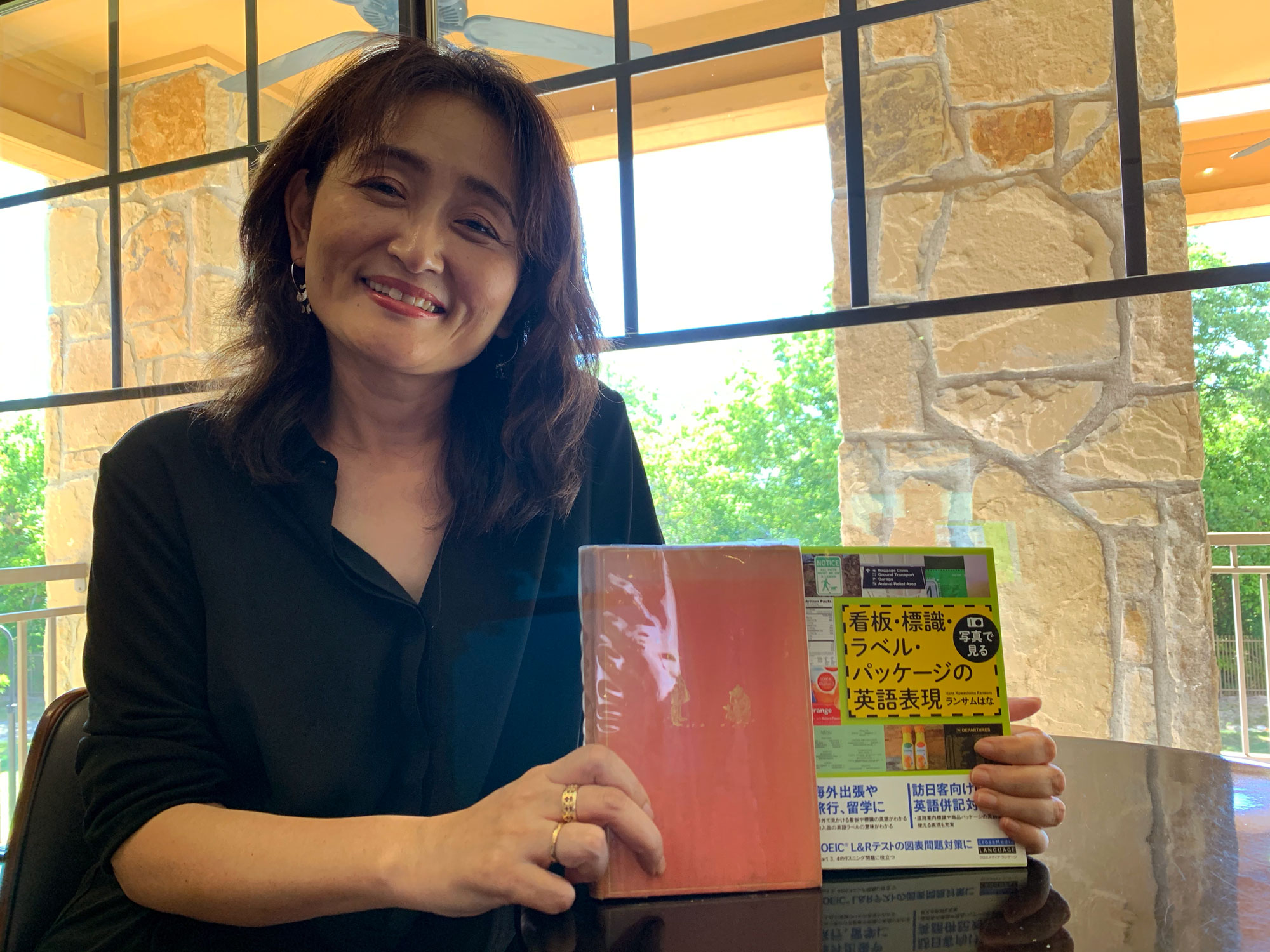 Hana Kawashima Ransom holds her antique copy of “The House at Pooh Corner” (left) and the first book she has authored, “English Expressions in Signs, Labels, and Packaging.”

“I thought, ‘There’s got to be somewhere in the world where I feel comfortable. I may not speak [English] now, but one day I will.’ ” 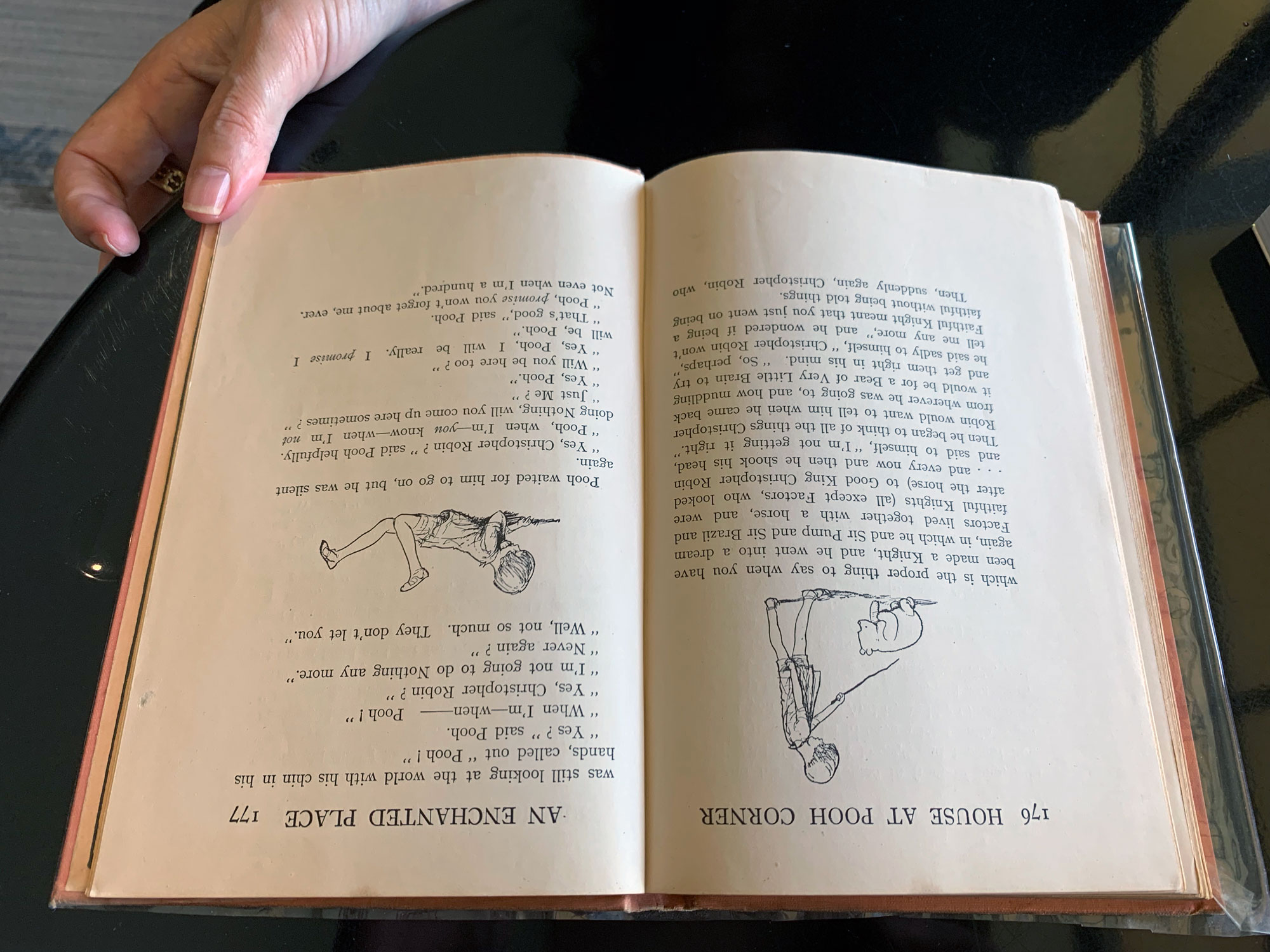 Hana Kawashima Ransom’s 1927 copy of A. A. Milne’s “The House at Pooh Corner.” Her favorite passage is at the very end, where Pooh promises Christopher Robin he’ll never forget him. 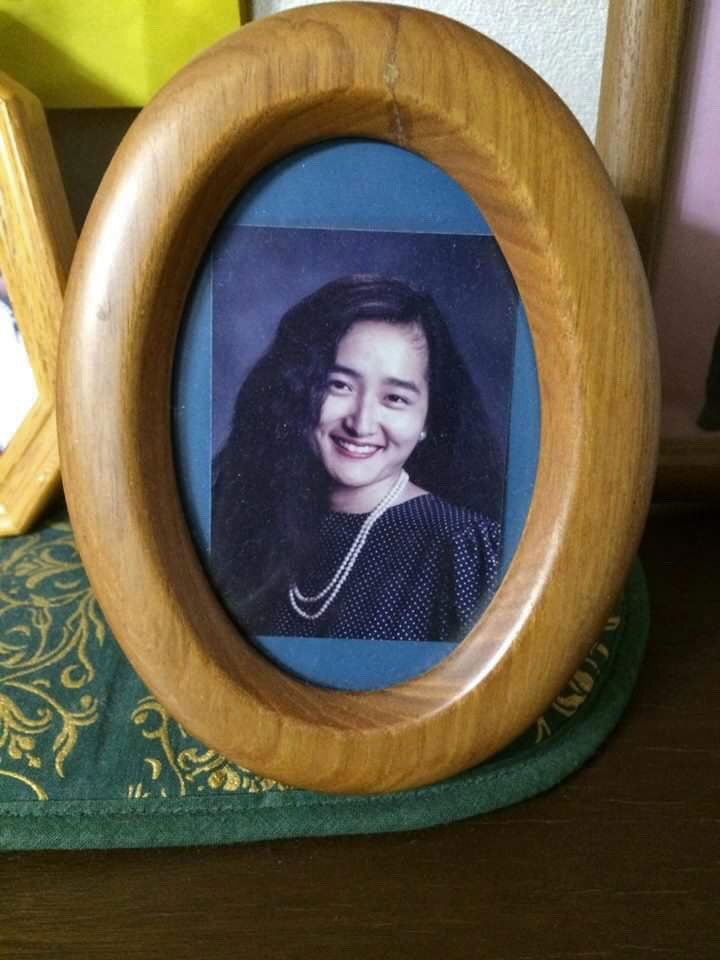 Hana Kawashima Ransom received her graduate degree from the University of Texas at Austin in Curriculum and Instruction in 1993. 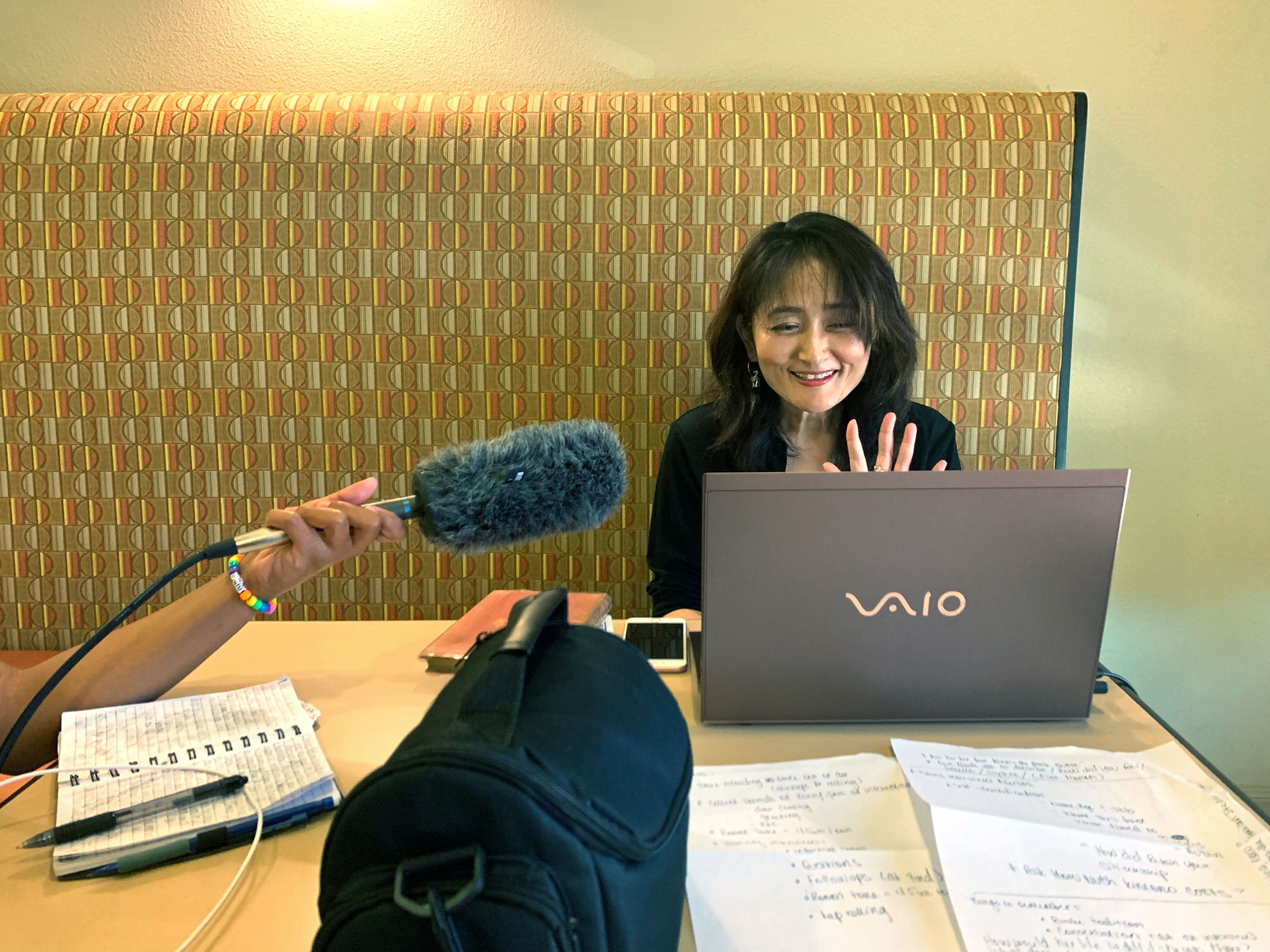 Hana Kawashima Ransom greets her friend, Rié Hiramatsu, before recording on the Hiramatsu’s “Talking All Thing English from London” podcast.